I got very behind on this enjoyable cozy mystery series, but I've caught up.  (It helps that books take a year or so to be written and published but I can read them in a day or two.)

And just as was the case with the earlier Ellie Avery mysteries, these are fun fluffy stories.

Unfortunately I have AWFUL timing, reading the one about the grandfather's death less than a month after my own grandpa died.  That was rough. 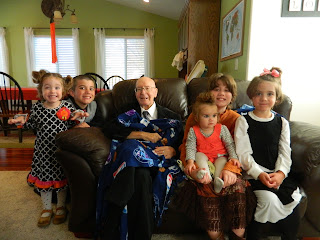 Even though it was a rough read, though, it was still a really good story.

All in all, I'm still totally enjoying this series, and I'm all caught up until March.  My only drawbacks I'm seeing are the increasing number typos (which is unfortunately true for oh-so-many series) and the unfortunate trend in titles.  I liked the earlier titles better than the current onslaught of triple Ms.

Bottom line-- if you haven't tried these yet, you should.
Posted by Britt at 5:00 AM

Britt
Utah
I admit it, I'm a bit obsessed with books. I've been known to read 2-3 books in a day. So, naturally, I thought it would be fun to blog about what I'm reading or what I've read-- reviewing as I go. Hopefully, you see something that you'll enjoy reading... or, if nothing else, maybe I'll just save you from reading something wretched. And yes, the links to Amazon or Indiebound are my affiliate links.